Should I Make After-Tax 401(k) Contributions?

If given the opportunity to contribute after-tax dollars to your 401(k) and subsequently roll to a Roth IRA, back up the truck.

Funding a 401(k) with after-tax contributions is the first step of a process that can potentially direct significant dollars into your Roth IRA.  It may be the best financial planning opportunity currently available. In this post I’ll walk you through:

a) how to determine if you are eligible

b) how to calculate your maximum after-tax contribution and

c) how to roll your after-tax 401(k) contributions into your Roth IRA for the potential of a lifetime of tax-free appreciation.

First, a primer on the types of 401(k) contributions a plan participant can make:

What is tax deferral?  It means that earnings (appreciation, dividends and/or interest) that would ordinarily be subject to tax is postponed until a later date.  Regardless of the type of 401(k) contribution that is made, if you contribute $1,000 and the value appreciates to $1,100 over the course of the year, you will not be subject to tax on the $100 of earnings unless there is a triggering event, usually a distribution.  If left alone, the tax on the $100 of earnings is deferred to a later date.  $1,100 remains in the account to hopefully earn additional earnings.

Tax deferral sounds great.  You avoid annual taxation on your earnings and thus allow for your savings to accumulate more rapidly over time.  But at some point doesn’t the IRS want a piece of that? Absolutely. And now we’ll see how the three types of 401(k) contributions are taxed upon distribution in retirement.

Based upon what we’ve discussed thus far, the short answer is “not really.” Tax deferral is somewhat attractive, but subjecting the earnings to  taxation at ordinary income rates upon distribution is certainly not appealing. Many have concluded they would prefer to direct additional savings beyond their pre-tax or Roth 401(k) contributions to a brokerage account in which earnings are subject to more favorable capital gains tax rates.  That’s a reasonable conclusion. Or probably better said, that was a reasonable conclusion.

Everything changed with the issuance of an IRS notice on September 18, 2014.  While I had waited for years for guidance, I was shocked that the notice issued by the IRS blessed a related strategy that many had previously believed was a loophole.

IRS Notice 2014-54 states that in certain circumstances, after-tax 401(k) contributions can be rolled into a Roth IRA.

Think about that for a minute.  Roth IRA contributions are limited to $6,000 annually (with a $1,000 catch-up provision) and income must be below the threshold set by the IRS annually.  Roth 401(k) limits are more generous at $19,500 (with a $6,500 catch-up). But still, there are contribution limits in place for good reason.  Without them, an investor could shelter an unlimited amount of money in an account and completely avoid taxation on the earnings if withdrawn after 59 ½.

But with Notice 2014-54 the IRS paves the way for individuals to contribute significant amounts to their after-tax 401(k) and subsequently roll the money into their Roth IRA.  It’s a simply phenomenal opportunity that I have to illustrate further:

And yes, I recognize I have still yet to quantify how after-tax contribution limits are determined but let’s proceed with the earlier example suggesting you make annual after-tax 401(k) contributions of $20,000 that are subsequently rolled into a Roth IRA.  If we assume a 30 year time period and 5% appreciation, the result is a nest egg of over $2,000,000.  And according to current law, the IRS never forces the account owner to take a distribution from this supersized Roth IRA. And any voluntary distributions are entirely tax-free.

The most straightforward example occurs after retirement or a job change.  We call that “separation of service.” Once separated a former employee can roll their 401(k) plan into an IRA.  At that time particular attention is given to the types of money within the account. These are called “money sources.”  Pre-tax 401(k) funds are usually rolled into a Traditional IRA. Roth 401(k) funds can be rolled into a Roth IRA. But what happens to after-tax funds?

Notice 2014-54 allows for the after-tax funds to be split assuming the proper request is made at the time of the rollover/distribution.  Per the previous example, assume you make $25,000 in after-tax contributions and accumulate $10,000 of earnings.  Thanks to Notice 2014-54, when you request a total distribution of your former 401(k) at one time you can also direct your former 401(k) provider to split the distribution into two parts: $25,000 to your Roth IRA and the $10,000 of earnings to the Traditional IRA.  Note this if for total distributions only!  The rollovers are not taxable events. The ultimate distribution from the Traditional or Roth IRA will follow the rules previously discussed. Note that the $10,000 of earnings will be subject to ordinary income tax.  The ability to move $25,000 into the Roth is pretty attractive. But you may be able to do better.

What if you (hypothetically) contributed $25,000 after-tax to the 401(k) on one day and rolled the funds into the Roth the next day – before any earnings could accrue?  Then the hypothetical $10,000 appreciation occurs over time within the Roth IRA.  Thus the eventual Roth IRA balance is $35,000.  See the difference from the prior example?

The question becomes how often can you request a full distribution of your after-tax funds while still employed.  The technical term is a full “in-service distribution.”  The IRS doesn’t meddle with this.  The answer is found in your 401(k)’s (or 403(b)) Summary Plan Description (SPD).

a) allows and separately accounts for after-tax contributions and

you can request a full distribution of the after-tax account and simultaneously request that the distribution be split with after-tax funds directed to your Roth IRA and the earnings directed to your Traditional IRA.  Assuming the plan allows, the request could be repeated annually to successfully direct significant dollars into the tax-advantaged shelter of a Roth IRA.

If you’ve determined that this strategy will work for you, here are the step-by-step instructions.  There may be some variance depending upon your 401(k) plan rules.

To determine the amount of your after-tax contribution, subtract your pre-tax and/or Roth contribution and your employer contribution from the $57,000 limit.  For example:

As noted the employer contribution is simply an assumption.  It will differ for everyone, even for two people working at the same company.  And you don’t want to contribute so much after-tax such that you may cannibalize the employer contribution.  While this strategy is great, it certainly doesn’t beat the free money offered by your employer.  Also, don’t over-contribute by exceeding the $57,000 deferred compensation limit.

4. Translate the contributions from dollars to percentages.  Most 401(k) plans require a participant to determine the amount of their contributions as a percentage of their gross pay.  We’ll continue with the assumption of $100,000 of gross income.

If the intention is to maximize the pre-tax contribution of $19,500, a 20% pre-tax deferral rate is needed.  Assuming you only have one employer, the plan will stop further contributions once you hit the $19,500 limit.

In this example the Roth 401(k) contribution would be 0%.

To contribute an additional $25,000 after-tax, the after-tax deferral rate would be 25%.  The online request may be appear similar to this: 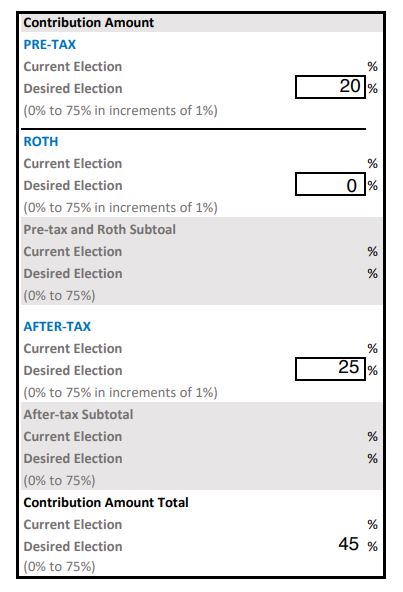 The total contribution is thus 45%.  Gulp.

Um, how do I eat?  I assume you answered this question for yourself long before now but if not, the answer is likely a) other savings, b) a spouse’s income or c) the soup kitchen.

Is it advantageous to live on other savings and maximize after-tax 401(k) contributions?  Most of the time, yes. There could be some exceptions but usually the ability to shelter all future appreciation from taxes is highly desirable.

5. Assuming the plan allows, let’s assume you request a distribution after one year.  Total hypothetical after-tax contributions are $25,000. Earnings on those after-tax contributions are $1,000.  When you request a full distribution, the plan will a) limit your request to just the segregated after-tax account and b) force you to withdraw both the after-tax contributions and the associated earnings.  You’ll want to clearly instruct the plan provider to issue two checks: the after-tax contributions of $25,000 to your Roth IRA and the $1,000 of earnings to your Traditional IRA. If done correctly, neither rollover request is a taxable event.  The checks will likely be mailed to your home but payable directly to your IRA custodian (for your benefit). For example, “Charles Schwab FBO Brendan Willmann.” Ideally the account number will be listed on the memo line.  Forward the checks to your custodian for deposit into the Roth IRA and Traditional IRA, respectively.

7A) Leave the funds in the Traditional IRA and invest as desired.

7B) Convert the Traditional IRA to your Roth IRA (at which time the $1,000 conversion is taxable).

Wash, rinse, repeat.  Max out your 401(k) contributions for the next year, request the distribution and address the Traditional IRA balance as desired.

The usual parting advice is especially applicable as failure to follow the IRS guidelines can result in a significant amount of unexpected taxation.  Consult with a qualified tax advisor to ensure that your plan allows for this strategy and that your actions are in accordance with IRS rules.

The articles presented on this blog are general in nature and should not be assumed to be applicable to your situation. In addition, tax law changes daily and the articles on this blog are not updated to reflect these changes. Anyone receiving any part of the information on this blog should not rely on or act or refrain from acting on the basis of any matter or information contained in this blog without seeking appropriate tax, legal or other professional advice. The transmission and receipt of information contained on this blog does not form or constitute a client relationship. Nothing in this blog constitutes legal advice. Opinions rendered by tax professionals are not authority. You agree to hold Brendan Willmann, CFA, CFP®, CPA, EA, forever harmless from any liability for your use or failure to use the information, advice, referrals, or suggestions provided by this blog at any time.